OpenTable Diners Have Spoken: The 100 Best Restaurants in America 2018

, Dec. 5, 2018 /PRNewswire/ -- Today, OpenTable, the world's leading provider of online restaurant reservations and part of (NASDAQ:BKNG), revealed the 100 in America 2018according to OpenTable diners. The list is a comprehensive look at the year's most beloved dining spots culled from more than 12 million verified diner reviews of over 28,000 restaurants in all 50 states and 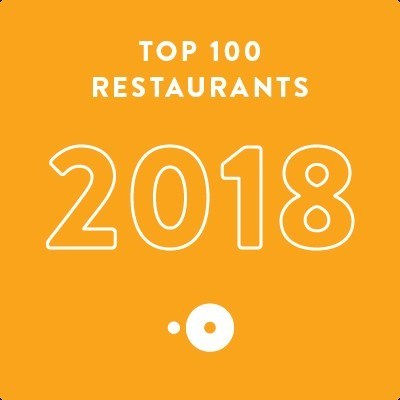 From foodie-favorites with world-renowned chefs to breakthrough hidden gems, the list showcases the platform's comprehensive network of dining options for every occasion across the country. holds the most honorees with 24 winning restaurants followed by with 15, with nine and with eight. boasts seven winners followed by with six winners while and each claim four. New to the list are , , and , with standout restaurants including Matsuhisa Denver, , AgriVino and at , respectively. Additional states represented include , , , , , , , , , Oklahoma, and .

While American and Italian proved to be the most popular cuisines, they were closely followed by French, Indian, Japanese, Korean, Mediterranean and Middle Eastern. Hyperlocal cuisines including Californian, Hawaiian and Tex-Mex are also represented in the list. The diverse list points to an increase in appetite, from coast to coast, for adventurous eats, more exotic flavors, as well as travel-inspired dishes.

"The 100 in America list gives voice to OpenTable's diner community by honoring the restaurants they love to visit and that consistently provide dining experiences that delight time and again," said , Chief Dining Officer at OpenTable. "The diversity of this year's list truly showcases how OpenTable helps diners find the right restaurant for every appetite and every occasion."

The list is generated solely from diner reviews collected between , and . All restaurants with a minimum "overall" score and number of qualifying reviews were included for consideration. Qualifying restaurants were then sorted according to a score calculated from each restaurant's average rating in the "overall" category.

Based on this methodology, the following restaurants, listed in alphabetical order, comprise the 100 in America for 2018 according to OpenTable diners. The complete list can also be viewed at https://www.opentable.com/lists/best-restaurants-in-america-for-2018.

The Table at Season To Taste -

* Restaurants with multiple winning locations were counted one time.